This year I've noticed a few of my students have really started to get interested in telling jokes.  Unfortunately, this interest doesn't coincide with an understanding of how jokes work.  A few of my students have started telling simple one line "jokes" that are a basic lie about something that happened and following it up with "I joke you" or "I kid you."  As this isn't just happening with me, and has been happening throughout the day, and as a result I ended up with several joke telling goals and objectives.  With this, I needed to make some materials as a place to start with for these students.

So here is my joke telling unit!
Grab it on TPT! 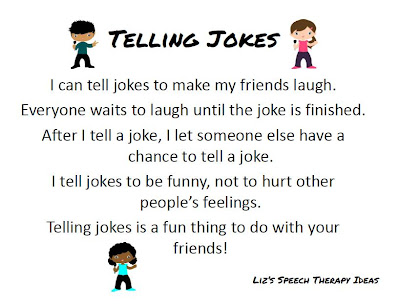 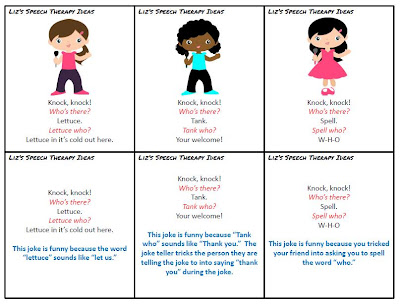 Includes:
-Includes a social story about telling jokes and a description about different kinds of jokes.
-Includes knock-knock and riddle cards for kids to use to tell jokes in speech therapy sessions.
- 24 Knock, Knock joke cards and 36 riddle cards. 6 joke cards for each kind of joke include why this is funny cards because many students who struggle with telling jokes also struggle with figurative and other non-literal language. Once you’ve used the cards to explain why some of the jokes are funny let your students figure out the rest of the jokes. 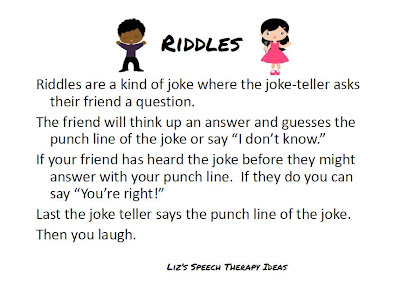 Instructions:
-Cut and laminate all materials.
-Read the social stories on telling jokes and kinds of jokes with your students. Let your students pick the
kind of joke they want to start with riddles or knock-knock jokes.
-Read the social story for the kind of joke they want to start with.
-Do the first 6 jokes together. Read the why the jokes are funny cards. Do the students agree? Why are why
not?
-Go through the rest of the kind of jokes. What jokes do each student like and why? Have each student
memorize their favorite joke and tell a friend or teacher outside of the speech room. 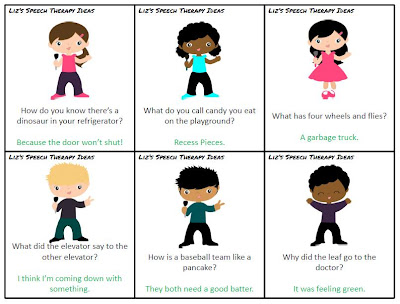 I'm so excited for my kids to be able to tell even a few memorized jokes.  Hopefully, they'll generalize some
of the skills, but I'm most looking forward to a better understanding of telling jokes in general.

Check it out on TPT and get your kids laughing!

Liz's Speech Therapy Ideas
I'm a Speech Language Pathologist working in the public schools. Right now I am full time in an elementary school working primarily with grades 2-5. I love what I do and this blog is a way to share what I know and, hopefully, help me do my job better! Find me on Facebook at: https://www.facebook.com/LizsSpeechTherapyIdeas